Part of the reason it took me so long to get information on the SI joint is that I simply didn’t know where to start looking.

Since I first developed my own SI joint issues in 2011, it does seem as though a lot more information on the subject has made its way onto the web (and I’m now doing my best to contribute to that effort!).

However, now that I look back, I can also see that there was some legitimate information out there at the time… I just wasn’t in a position where I was able to understand it.

So, in this post, I thought I would provide you with a few terms that would have been really useful for me to know back in the day.

Terminology related to the SI joint:

Sacrum— the base of the spine that makes up part of the SI joint, along with:

Ilium— the hip bone.  The plural of ilium is “ilia.”

The SI joint is where the sacrum connects to the two ilia. 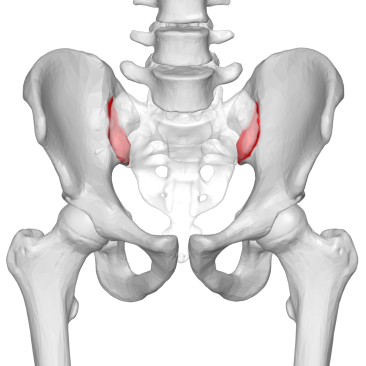 Anterior and Posterior Rotation of Hip Bones: This refers to the hip bones rotating forward or backwards in relation to the sacrum.  (For more, see my post on What happens when an SI Joint gets stuck?).

Hypermobility means the joint moves more than it is intended to.  There can be a few reasons for this.  One main reason is generally that the ligaments have been injured and are not holding things in place.

Sacroilitis— this term technically means “inflammation” of the SI joint, which is not necessarily the same thing as having the joint move abnormally.  For some reason, “sacroilitis” seems to be a more commonly used term among doctors than a discussion of abnormal joint movement.  I don’t know why– this needs to change.

Innominate: Another word that refers to the hip bone.  Technically the hip bones are each made up of 3 separate bones that are fused together.  However, functionally speaking, they act as one bone, which is why for our practical uses on this blog, we won’t need to go into detail on this subject.  “Innominate” means “doesn’t move”– the three bones act as one hip bone.

Pelvis– Okay, we all basically know what the pelvis is.  I’m putting it on this list to clarify that the SI joint is part of the pelvis, and that there are a lot of great articles out there that talk about the SI joint in relation to the function of the overall pelvis.  So, consider the following search terms:

Pelvic pain; pelvic girdle pain — “girdle” just refers to the fact that the pelvis as a whole is round and contains and protects vital organs

Pelvic ring— refers to the fact that the pelvis is shaped like a 360-degree ring.  Sometimes we tend to think of things as 2-dimensional, based on how they may appear in a diagram, however in real life, the pelvis actually forms a ring with three major joints (the 2 SI joints and the pubic symphysis) all working as a whole.

Pelvic instability— This refers to the fact that there has been damage to the ligaments that are supposed to be holding the bones of the pelvis in place.  It is a similar concept to joint hypermobility.

Pubic Symphysis— the pubic symphysis is the other major joint in the pelvis which can develop problems along with the SI joint.  In fact, the two issues often go hand in hand, because the motion of each joint affects the other.

(To clarify, sometimes people actually refer to it as the symphysis pubis– it’s the same thing).

Okay, I think that’s just about all for now!

I truly believe knowledge is power– the more you know, the better you can advocate for yourself and ask your medical providers questions!

Perfect late summer/ early fall day in New England ☀️Apple picking! 🍎
✨ Can you guess what the first part of the body is to adapt to exercise? ✨
Got a goal? Keep moving towards it ✨