Hi everyone!   Many of you have been asking for more info on my exercise routine lately.

However, before I go into specific exercises, I wanted to let you know that one of the key things to remember about rehabbing the SI joint is that everyone is different.  Certain exercises may be completely painless for some people, but not work for others.

Luckily, it’s not so much about which specific exercise you do, as much as which muscle groups you’re activating.

That’s why, before I go into a specific list of exercises, I actually thought I’d start out by explaining more about which muscle groups are so important to make sure you’re working on strengthening.

What we know about core strengthening has changed a lot in the past decade or so.  When I was a high school runner, my coaches had us doing crunches and sit-ups.

Now we know that those exercises are actually not the best way to strengthen your core, because they don’t focus on the very most important muscle to core stability, the transverse abdominis.

The transverse abdominis is deeper than all of the other core muscles, and when it contracts, it acts like a “corset” to support your trunk. 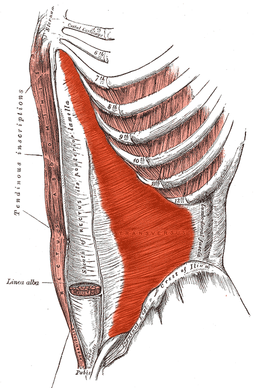 Exercises to strengthen the TA actually don’t involve crunches.  Instead, a physical therapist can teach you how to contract it in a way that stabilizes your trunk.  It will almost feel as though you are sucking in your belly button, as though you’re trying to squeeze into a pair of tight pants.

They’ll probably have you do this while you’re lying flat on your back.  Then you maintain this “sucking in” while you perform other motions that challenge your body– but only you’re sure you’re contracting it correctly.

Here is a video that gives you an idea of what it’s like to learn how to strengthen the TA.  As you’ll see, it’s a lot more about learning to identify the muscle and control it, than it is about brute strength.  But don’t worry if you aren’t able to figure out what to do yourself– I’d definitely expect you to need a PT to help you get it right.  (I certainly did, back in the day!).

The TA is also activated quite easily and effortlessly by pool exercises that force you to stabilize your trunk and legs in the water– but you do have to know how to contract it, in order to make sure you’re doing it right.  More on this later.

Update: I wrote another post focusing exclusively on the TA– you can read it here!

#2. The Muscles in the Back of the Hip (Hip Extensors, Abductors, and External Rotators)

But the truth is that there are several different muscles which make up what we commonly call the “glutes,” and they perform slightly different functions.

Rather than giving you an oversimplification, I want to walk you guys through the thought process that really helped me in my own recovery.  I started to take much more control over my own situation once I began to understand things on a more technical level.  That’s why I’m giving you the official names for these muscle groups, which are all located in the back of the hip/SI joint.

One of the reasons why it’s so difficult to treat is that there are no muscles that directly cross it.

Other joints in the body have one or two major muscles that directly cross them, so rehab can be more straightforward.

For the SI joint, things are a little more complicated because it isn’t a joint where major motion is supposed to occur. Instead, it’s meant to transfer forces as part of a larger overall force transfer system.   That’s why there aren’t any muscles that specifically act on it, compared to the muscles acting on the joints in your arms and legs.

That’s why it’s a bit more complex to identify which muscles to strengthen.   However, these muscles in the back of the hip, such as the gluteus maximus and gluteus medius, are *super* helpful.

For me, strengthening these muscles made a big difference in healing my recurring posterior rotation.   Weaker muscles are more likely to get tired easily, tense up, and then, in my case, pull that hip bone backwards.   Once I managed to get stronger, they had a lot more endurance, and stopped constantly pulling me into that posterior rotation. 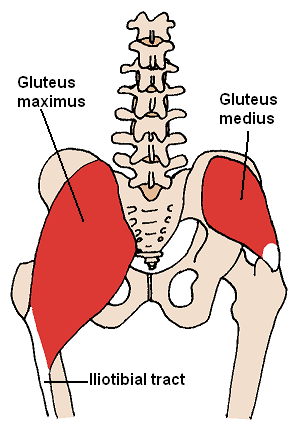 Again, there are multiple ways to strengthen these muscles, and what’s important is that you find a way to do it that works for you.

A great starting point is the Bird Dog exercise, as shown below:

But don’t worry– if it’s too strenuous for you, there are definitely less strenuous ways to activate the same muscles.

#3 Muscles of the Lower Back

Similar to the muscles in the back of the hip, the low back muscles are another “next best thing” to actually being able to strengthen a muscle that directly crosses the SI joint.

These muscle work hand in hand, along with the muscles in the back of the hip, to strengthen that whole part of your body. 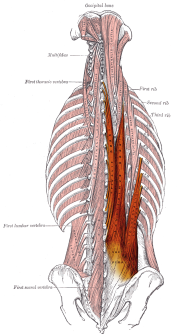 Both of the erector spine and the multifidus attach along the vertebrae and help to stabilize your low back and maintain good posture.

They are really deep inside the body, however, and aren’t the easiest muscles to visualize.  Luckily, you don’t need to be thinking about them consciously to strengthen them– you just need to do your exercises.

Both the transverse abdominis activation and the bird dog exercise also target these spinal stabilizing muscles.

Basically, as long as you’re doing these exercises with good posture and keeping your core stable, you would be working these low back muscles as well as your core.

Okay, so these are the main three.

Of course, a really thorough exercise program would have you strengthening all of the major muscle groups of the body, to ensure that your body is able to function optimally and let you do the things you want to do.

However, for SI joint dysfunction, I believe these are three major groups to focus your efforts on.

What do you guys think?  Are you currently targeting these muscles in your exercise routine?

Let me know in the comments below!